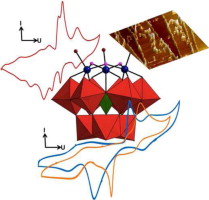 Electrochemical properties of two tri-manganese substituted Keggin-based tungstosilicates [MnII3(OH)3(H2O)3(A-α-SiW9O34)]7− (MnII3SiW9) and[MnIII3(OH)3(H2O)3(A-α-SiW9O34)]4− (MnIII3SiW9) were investigated. The two polyanions are isostructural, the only difference being the oxidation state of the Mn-ions. Despite their structural similarity the electrochemical behaviour is not identical. While it is well established that polyoxometalate (POM) electrochemistry is influenced by interplay between the pH of the electrolyte, the present ions and the pKa values of the complex, this is the first report that the initial oxidation state of the POM has a major influence on the electrochemistry of the transition metal within the molecule. In order to understand the influence of the initial oxidation state extensive electrochemical investigations were performed and the potential dependent adsorption behavior of the molecules on graphite was observed with atomic force microscopy. The reaction mechanism of the two POMs was determined and it was asserted that the divergent redox behavior is caused by a ligand exchange which takes place during the measurement. This influences the adsorption of the molecules on graphite which can be explained by the Born solvation model. Performing controlled potential electrolysis, a stable tri-manganese substituted Keggin ion containing MnIV3 was obtained electrochemically.